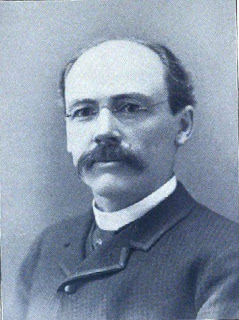 Yes, it's March 13 - the 165th anniversary of the birth of Charles Eadward Pratt in Vassalboro, Maine. Pratt was the first president of the League of American Wheelmen and author of The American Bicycler, one of the earliest cycling guidebooks. Pratt is considered by many cycling historians to be the Father of American Bicycling.

In addition to being a pioneering cyclist, an influential author and cycling advocate, and a native born Mainer, Pratt was also an occasional poet. In honor of the day, here's one of his cycling poems from the heyday of the high wheel era:


A SONG OF THE WHEEL.

Thy hoofs of round rubber and ribs of true steel
Shall bear me away from this tiresome town.

Aloft on thy saddle, set safe from all harm, —
The saddle ne'er mounted by trouble or care, —

I'll hie me away where the woodlands yet charm,
Where valleys are smiling and fields are yet fair.

With feet on thy quick-moving pedals impressed, —
The pedals that speed from the hurrying street, —

I'll seek the calm hills and the landscapes at rest,

Where green leaves are fresh and the breezes are sweet.

Out over the road while the sun is yet high,

While sunlight and shadows are nimbly at play,—

О Bicycle! free as the swallows that fly,
We'll hover, we'll hasten, as joyful as they.

Posted by Keeper of Ride Maps at 9:24 PM No comments: