Ride on the Fourth of July 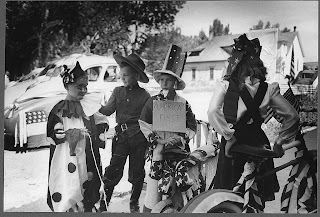 We had a nice hilly ride in Mount Vernon last Saturday. The weather was fine, the roads were (mostly) great, and we had a good group - including some new folks - which is always welcome. The Fourth of July is coming up, which means another great ride in Sidney, led, as in year's past, by Jim Putnam. Hope you can make it, and if not, have a great holiday weekend.
(Photo: Fourth of July, 1941, Vale, Oregon. Library of Congress Collection.)

Posted by Keeper of Ride Maps at 11:33 PM No comments: 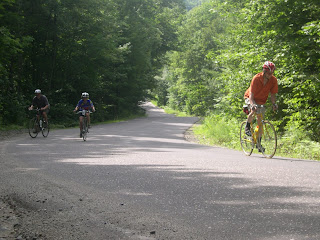 Welcome to the First Day of Summer! We had a great ride in Augusta last Saturday, followed by a great breakfast at the ride leader's house. Many thanks to Connie for both the ride and the hospitality. The Trek had great weather, too, and I trust they've all recovered and are ready for more, because there's more great riding ahead.
Please join us in Mount Vernon this Sunday to count ponds and have fun on multiple 50 mph descents (there are potentially three). Whether that has any benefit to cardio-vascular training I'll leave for experts to judge. I've been informed that this ride has 3,230 feet of climbing (by one rider's electronic calculations) and there are several 15% grades (short ones, though) on Sandy River Road. The ride also has some unique scenery, with a delightful (and flat) run along the Chesterville Esker - part of the route was laid out by glacier! We may also get together after the ride at the cafe in Mount Vernon.
Sunday, June 27th - MOUNT VERNON
"Eleven Ponds" - a tour past many of the hidden ponds and lakes in Mount Vernon, Fayette, Chesterville, and Vienna.
START: 9:00 AM, Mount Vernon Post Office, just off Rt. 41 on Main Street in Mount Vernon.
DISTANCE: 14 and 29 miles.
TERRAIN: Rolling with a few good hills.
HIGHLIGHTS: rural back roads winding through many small ponds and lakes, and across the top of the Chesterville Esker. Possible post-ride get-together at the cafe in Mt. Vernon village.
LEADER: Jim Merrick.

Posted by Keeper of Ride Maps at 11:12 PM No comments: 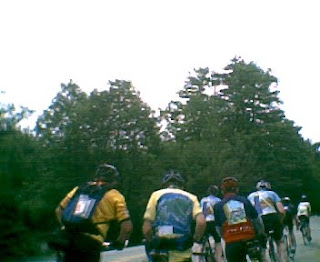 We had a better-than-anticipated ride in Readfield Saturday, as we were largely successful in dodging raindrops that weren't in the original forecast. While the skies tried to decide whether to pour or not, Frank led us on some short, improvised loops so we were never too far away from the ride start in case the skies really opened up. In doing so, he took us down some great roads that we hadn't been down before, and we had a lot of fun. Next Saturday's ride will be in Augusta, and it will include breakfast on the agenda. Last year's event was really well received, and you wouldn't want to miss it. To those of you doing the Trek, good luck, good weather, and Bon Route!
Saturday, June 19th - AUGUSTA
"Capital Breakfast Ride" - a tour through the streets and past the features of our capital city.
START: 8:00 AM at the parking lot of the Hussey Elementary School on Quimby Street in Augusta. Quimby is right off Rt. 100 at the traffic light across from Auclair's Cycle heading north; detailed directions here: http://www.augustaschools.org/academ/schools/hussey/directions/directions.html
DISTANCE: 25 miles.
TERRAIN: moderate with some flat stretches riverside.
HIGHLIGHTS: breakfast, the capital, the Kennebec close up, new and intriguing routes - and did we mention breakfast?
LEADER: Connie Brown.
Posted by Keeper of Ride Maps at 4:59 PM No comments: 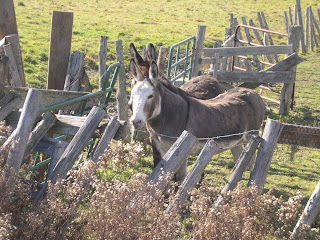 We had a rather soggy weekend that saw our scheduled joint ride last Saturday with the Central Maine Cycling Club postponed until some later date. I spent the morning at a special alumni ride with members of the Colby Cycling Team since it was my (gasp!) 35th reunion. I have to say that after riding 20 miles plus in the pouring rain with those guys, I didn't feel so special - I was definitely spotting them 35 years. I could barely stay with them on the hills, and truth be told, I suspect they were dogging it. Not that that mattered much - I don't think that if I turned the clock back 35 years I could've climbed that effortlessly then. It was fun, though. Hopefully the weather will be much nicer this Saturday when we return to Readfield for another fine ride, and yet another opportunity for me to avoid acting my age. 'Til then!

Saturday, June 12th; READFIELD
"Readfield Roundabout" - a tour in and around the scenic byways of Readfield or thereabout.
START: 9:30 AM, at the Readfield Elementary School on South Street, a half-mile from the junction of Rt. 17 and South Street at Readfield Depot. Readfield Depot, where there is a small market and a RR crossing, is about a mile south of Readfield Center.
DISTANCE: 25 to 30 miles.
TERRAIN: Rolling with a few hills.
HIGHLIGHTS: Readfield and its surrounding towns are interwoven with fine cycling roads and scenery, and this ride will scope out a good selection of both.
LEADER: Frank Rosen.
Posted by Keeper of Ride Maps at 11:46 PM No comments:

We had another great ride last Saturday to kick off a splendid Memorial Day Weekend. Thanks to Denise who put the route together on short notice, and arranged for a post-ride cookie sampling at Tom's Bike Boutique in East Winthrop. Following a great ride with eating in a bike shop, surrounded by beautifully sculpted bikes, makes one feel like you're at an opening at an art gallery. A special treat! Let's hope the fine weather holds up for this Saturday, when we join the folks of the Central Maine Cycling Club for a joint ride in Vassalboro. See you there!

Saturday, June 5th - VASSALBORO
"Tour de Vassalboro" - a tour through the scenic back roads of Vassalboro
START: 9:30 AM at the Vassalboro Community School, 1116 Webber Pond Road, off of Bog Road approx. 3 miles from the junction with Rt.32 in East Vassalboro (see map).
DISTANCE: 25-30 miles
TERRAIN: flat to moderate
HIGHLIGHTS: a joint ride with the Central Maine Cycling Club, featuring quiet back roads through a very scenic area
LEADER: Dave Richard.
Posted by Keeper of Ride Maps at 9:34 PM No comments: