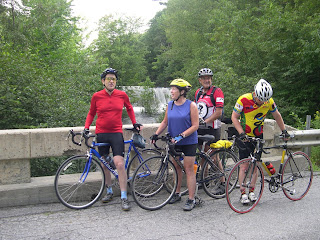 Since our last ride we have had a ton of rain, lengthy power outages, and I personally have had a plague of bicycle-related mechanical problems. My in-season solution has always been to have more than one bike to fall back on, but the problems have started to mount, and now I am faced with multiple repairs. But the weekend weather forecast is too nice to let this great fall weather pass, so I'll try to come up with a working bike by Sunday when we head out to Readfield and Wayne. We will have a short loop in case some people want to head over to Vassalboro where the CMCC is sponsoring an event with time trials Sunday. Otherwise I hope to see you Sunday morning in Readfield - with a working machine!

Sunday, September 11th: READFIELD
"Pedaling to Pocasset": a sampling of the fine back roads of Readfield, Wayne, Fayette, and Kents Hill, with nice runs along Pocasset Lake and Lovejoy Pond.
START: 9:00 A.M., Readfield Center, near the junction of Rt. 17 and Rt. 41. Park in the lot behind the Readfield Post Office.
DISTANCE: 20 miles
TERRAIN: rolling with a few hills.
HIGHLIGHTS: splendid waterfall in North Wayne (a lot more impressive than it usually is this time of year), quiet roads skirting the shores of Pocasset Lake and Lovejoy Pond; possible ice cream stop in Wayne and/or the Apple Shed in Kents Hill.
LEADER: Jim Merrick.

NOTE: The Downeast Sunrise Trail ride re-scheduled for next weekend, Sept. 17-18, is still on, as far as I know, and we will have updates later in the week. The following weekend is the Common Ground Fair in Unity, where I will be working at the Stanley Museum booth again on Friday and Saturday. The Bike Coalition can also use volunteers at their bike valet parking area (our Museum booth will be right next to them this year!). If any of you are interested in pedaling to the fair, we can try to put together a ride up near Unity on the 23rd or 24th. Let me know what you think. We can also use ride leaders for the remainder of September and into October. Still some great fall riding ahead!
Posted by Keeper of Ride Maps at 10:36 PM No comments: