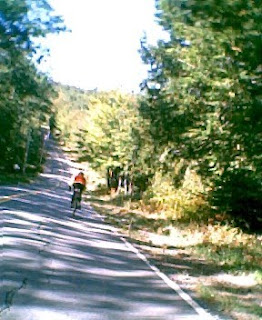 We had a very pleasant ride on Sunday morning in Wings Mills despite the light rain that was supposed to fall in the afternoon, and the hot dogs and hospitality at the Lewis' post-ride spread were absolutely first rate! Many thanks to Ken, who is already thinking of a date for his ride next year. This Saturday our roads lead to Rome with its multiple hills - and an optional long loop around Great Pond. The weather looks like it will be clearing up for this weekend - hope to see you then!


Saturday, August 28th: ROME
"The Seven Hills of Rome" - a roadside tour of the many hillside trails through Rome and Belgrade.
START: 9:00 AM, Rome Town Hall at the corner of Rt. 225 and Mercer Road, about 0.3 mi from the junction of Rt. 27 and Rt. 225.
DISTANCES: 20 - 35 miles.
TERRAIN: Moderate to Hilly.
HIGHLIGHTS: the route passes 5 trailheads, Blueberry Hill and the Kennebec Highlands. There is an optional short hike up French's Mountain to a spectacular scenic vista.
LEADER: Jim Merrick.
Posted by Keeper of Ride Maps at 6:34 PM No comments: 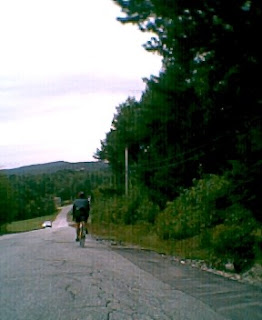 We had great weather - sunny and cool - for our ride last week in Readfield. Many thanks to Frank for the great route, and the great ride stop at the Kents Hill Orchards - the raspberry turnovers were a real treat. This Sunday Ken is leading us on a ride exploring the other side of the Belgrade Stream in Mount Vernon, followed by a hot dog roast at his house overlooking the water. We have openings in the KVBC ride calendar for leaders in September and October. If you can lead a ride, contact Jim at hjmerrick@gmail.com. Fall is coming - more great riding ahead!


Sunday, August 22nd - WING'S MILLS (Mount Vernon)
"Hot Dog! - The Hot Dog Ride" (not because we'll ride like one but because we will want one) - a tour through Mount Vernon, Belgrade, North Augusta, and Manchester
START: 9:00 AM at 49 Marble Point Rd., Mount Vernon
Directions to Start:
From Augusta, take #27 North to Belgrade and turn left onto #135 (Christy's store and blinking light)
Go 3 miles and right onto Wings Mill Rd; go 2.5 miles and right onto Marble Point Rd. which is just after crossing Belgrade Stream; it is a hard pack dirt road and we are the log home on the right)

Delorme Maine Atlas Map 12; A-4. Just west and across the stream from the intersection of Dunn Rd and Wings Mill Rd. (Marble Point is not listed by name on the map). 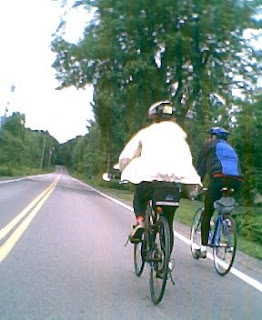 We had splendid weather for the China Lake-Palermo-Vassalboro ride last week, with picture perfect views from Mo's Mountain (which I'm told has a story about it, though I haven't been told what it is yet. Probably something involving cursed chainrings, judging from some technical problems one of our riders had to endure - and I think everyone else had cursed chainring tattoos.) This week's adventure involves Mount Pisgah - and maybe some ice cream and apple turnovers ("turnovahs" for those of you who are natives). What more could you want? See you there!

Sunday, August 15th; READFIELD
"Mount Pisgah Turnovah" - a tour from Readfield to Winthrop to Wayne and back to Readfield.
START: 8:30 AM, at the Readfield Elementary School on South Street, a half-mile from the junction of Rt. 17 and South Street at Readfield Depot. Readfield Depot, where there is a small market and a RR crossing, is about a mile south of Readfield Center.
DISTANCE: approx. 30 miles.
TERRAIN: Rolling with a few hills.
HIGHLIGHTS: Readfield and its surrounding towns are interwoven with fine cycling roads and scenery, and the ride may feature stops at Tubby's Ice Cream in Wayne and the re-opened Apple Shed in Kents Hill, before returning to Readfield where the town's "Heritage Days" events are in full swing.
LEADER: Frank Rosen.
Posted by Keeper of Ride Maps at 10:59 PM No comments: 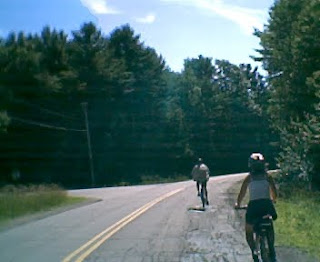 Greetings everyone! Hope you all had a splendid weekend and were able to get out and ride. Mnay thanks to Frank Rosen for volunteering to lead the ride in Fayette on short notice. I had a great time down in Standish volunteering at the MS-150 ride - beautiful routes and great weather. Things are looking a bit dreary for this week, but better for the weekend. If we need the rain, better to see it fall midweek or at night!
If you haven't heard by now, the KVBC ride, "The Alna Alternative," scheduled for Sunday in Alna has been postponed and will be rescheduled for some other date in the future. Meanwhile we will have an alternative ride around China Lake on Saturday. It's "almost Alna," so I hope you can all make it!

Saturday, August 7th; EAST VASSALBORO
"Almost Alna" - a tour around China Lake, with Palermo and Windsor added on the longer loop.
START: 9:00 AM at the Vassalboro Historical Society on Rt. 32 in East Vassalboro. From Augusta take Rt. 3 East 9.5 miles to Rt. 32 North for 4.4 miles. The Vassalboro Historical Society is in a red shingle schoolhouse on the right, lakeside.
DISTANCE: 18 and 36 miles.
TERRAIN: Rolling with a few hills (short ride); moderately hilly to Hilly (long ride).
HIGHLIGHTS: Fine back roads and views of China Lake, ridgetop views and the village of Palermo (watch for Elk).
LEADER: Jim Merrick.
Posted by Keeper of Ride Maps at 10:17 PM No comments: