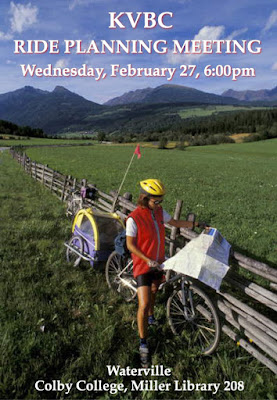 The Winter weather is not being kind or cooperative, and with another storm heading in on Thursday and a number of people saying they cannot make the scheduled meeting that night, we are once again postponing the KVBC Ride Planning Meeting.  Our meeting has been rescheduled for Wednesday, February 27, at the same time and place, 6:00 pm, Miller Library Room 208, at Colby College.  Sorry for the shifting of dates - let's hope that "third time's the charm" and hopefully we'll see you on Wednesday the 27th.  Meanwhile here is a very tentative, preliminary ride calendar of 2019 events, from what we know (or think we know):


2019 Potential Rides and Other Club’s Events 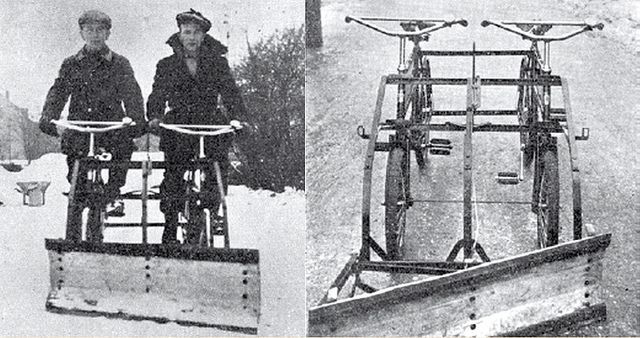 Due to the forecast of snow, sleet, and what-have-you on this Wednesday, we have decided to postpone our Ride Planning Meeting until the following week.  The meeting has been rescheduled to Thursday, Feb. 21, at 6:00pm - same location: Colby College, Miller Library, Room 208.  My apologies for any inconvenience, but travel on this Wednesday does not look good, and there may be parking restrictions due to snow removal.  So we will meet the following Thursday when the room is available again.  Once again, if you cannot make the rescheduled meeting but would like to lead a ride, please let me know the particulars and I'll work it into the calendar.  And if you would like to participate in the meeting remotely, let me know and I'll set up the conference call. Also, if you might be interested in a new KVBC jersey, let me know.
Posted by Keeper of Ride Maps at 8:39 PM No comments: 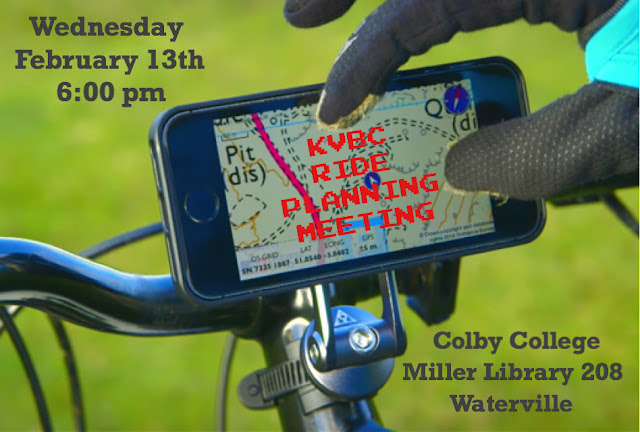 Spring will be upon us before you know it, so it is time to start planning our ride calendar for 2019!  Our annual Kennebec Valley Bicycle Club Ride Planning Meeting is scheduled for  Wednesday, February 13 at 6 pm.  We will meet in Waterville, at Colby College, Miller Library, Room 208 (also known as the second floor conference room, if you are asking for directions at the main desk). Directions: http://libguides.colby.edu/c.php?g=98548&p=638088.  The best parking will be in the Roberts Lot, near the Colby Art Museum.  If you cannot make the meeting in person but would like to take part via a conference call, let me know before the meeting and I will send you the phone number and opt in code.  And if you would prefer to just send me your ride information - date, start location and start time, distance, and any features of note (ice cream, pastry shops, etc.) - I'll be happy to take it down.  All are welcome at the meeting, and we will likely order pizza to help with the planning.  Hope to see you Wednesday!
Posted by Keeper of Ride Maps at 10:14 PM No comments: