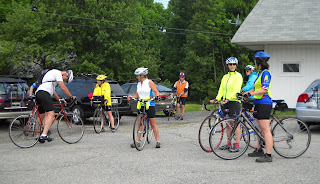 As part of our countdown to Spring, here is the first of a series of ride reports from last Summer, starting with the Memorial Day weekend ride on May 29, 2010, starting in East Winthrop at Tom's Bike Boutique on Rt.202.

We had a fine turnout, considering that the ride was scheduled at the last minute on a long holiday weekend. The weather was dry, although mostly cloudy. 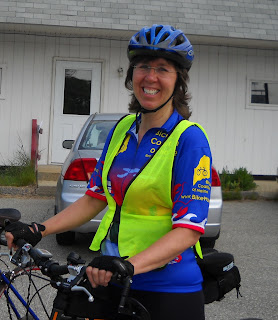 It's usually a good sign when the ride leader is smiling! (Or perhaps that's the trademark of a professional dental hygienist?). 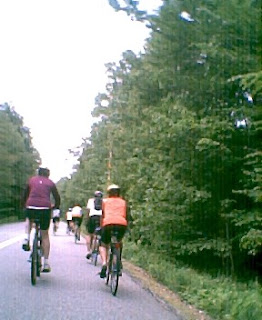 The route took us over the back roads of Winthrop and into Litchfield and Monmouth. 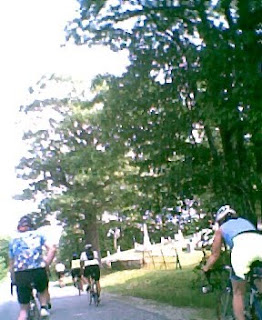 We rolled past historic cemeteries and many lakes and ponds. 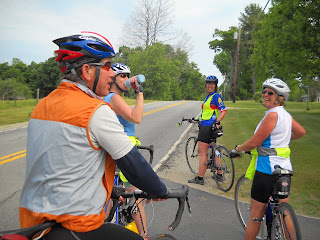 As customary, we often stopped to chat while we waited for others to catch up. 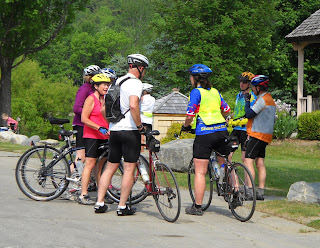 And once everyone had caught up, we more often than not, continued to chat.

But there were more fine roads to explore, so we were soon on our way.

If you missed this ride, don't miss it twice - Denise will be leading it again on April 30th! Thanks, Denise!
Posted by Keeper of Ride Maps at 9:43 PM No comments:

Getting Anxious For Spring? 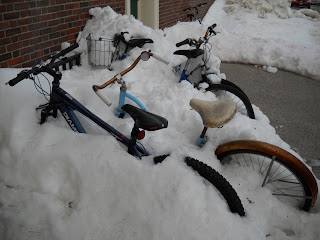 If you're one of those people who think all of this wonderful, winterful, ice-crystalled Currier & Ives scenery would've looked REALLY great about a month and a half or so ago, you probably have lots of company. But have faith - we are just 46 days away from our first scheduled KVBC ride on April 23! And we will begin our countdown here on the POSTED ROADS club blog with ride reports from last year serving as previews for the rides ahead (if I can find time to post reports and get my bikes and legs in shape in the next six weeks). A special salute should go out to those who have been riding through the winter. In case you missed it, the Morning Sentinel had a nice profile of Denise Crowell last month: http://www.onlinesentinel.com/reallife/ice-biking-keeps-you-in-shape-all-year_2011-02-12.html.
KVBC Club Dues: our annual dues for 2011 become due on April 1st - still dirt cheap, at $10 per person or $15 per household. The money goes to pay for our insurance coverage, as well as club affiliation with the Bicycle Coalition of Maine and the League of American Bicyclists. Send your dues with a signed copy of the KVBC Membership Form (the link is under the Club logo on the blog) to Sandi Hodge at P.O. Box 511, Alna, Maine 04535. Please note the new mailing address which may not appear on the online form. Thank you!
We still have a number of open dates available for ride volunteers. If you can lead a ride, please contact Jim Merrick at 293-3784 or hjmerrick@gmail.com. We also have two additional rides to announce (one is actually an updated listing):
August 13 (Saturday) - Ken's Hot Dog Ride, 9:00 am, Wings Mills (Mt. Vernon), 25-30 miles Road, Ken Louis.
August 27-28 (Saturday & Sunday– KVBC Downeast Sunrise Trail, Time TBD, Ellsworth, 30-40 mi per day, one or two day ride (overnight option) on packed gravel surface to explore the new trail; Dave Wood.
THINK SPRING!
Posted by Keeper of Ride Maps at 9:21 PM No comments: