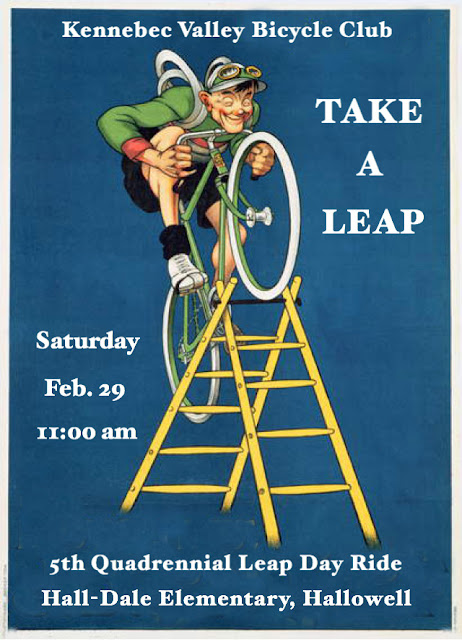 Hey, Look!  A ride announcement?  Yes, it's 2020, a Leap Year, which means we get an extra day to ride bikes!  Leap Day also falls on a Saturday, which has to be good luck - and good luck will come in handy, because it's also February, when weather, temperatures, and road conditions might make things (d)icey.  The ride itself is 23 miles, but might be shortened or canceled depending on conditions - stay tuned for last-minute updates.  Last Leap Day we had a nice mild day with a great turnout, considering that it fell on a Monday.  Let's hope for more of the same on Saturday!  See you then! 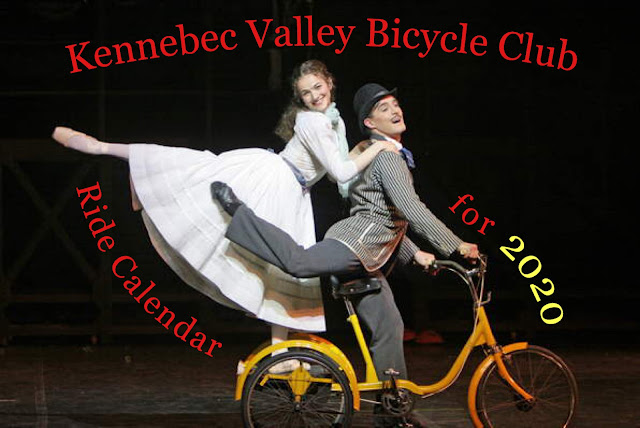 Here is the preliminary, draft, not-written-in-stone, Kennebec Valley Bicycle Club Ride Calendar for 2020!  Subject to change, other options might apply, not responsible for misrepresentations, void where prohibited by law.  And a heck of a lot of fun, by the looks of it.  Thanks again to all of our intrepid ride leaders!  Our first ride is less than two weeks away - the Leap Day Ride on Saturday, February 29.  See you then!
KVBC 2020 Ride Calendar 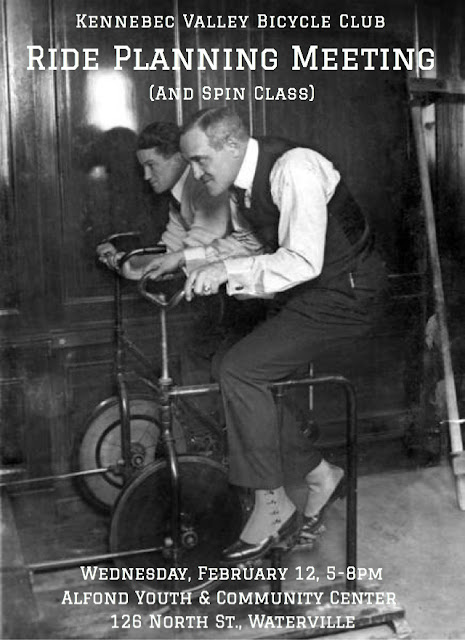 REMINDER - we are one week away from the KVBC Ride Planning Meeting on Wednesday, Feb. 12! If you would like to come to check out their up-to-date spinning equipment and the free spin session, you are more than welcome to.  You need not stay to help us eat pizza afterwards, but you're welcome to do that as well!

The Kennebec Valley Bicycle Club 2020 Ride Planning Meeting is scheduled for Wednesday, February 12 (snow date Feb. 26). We will meet at the Alfond Youth and Community Center, 126 North Street, in Waterville to plan out the KVBC Ride Calendar for the year. Jeanine Libby has offered to lead a free spin class to all interested members from 5 to 6 pm, followed by pizza and our ride planning meeting from 6 to 8 pm. To top it off, Jeanine will give us all a tour of the AYCC following the meeting. All are welcome, and if you cannot make the meeting but you would still like to lead a ride, please let me know all the details (if you have any).  Hope to see many of you there!
Posted by Keeper of Ride Maps at 8:18 PM No comments: