Down By The Riverside 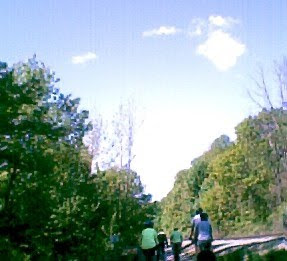 We had about a dozen riders on the KVBC rail trail ride, Sunday, May 16th. Many thanks to Dave, who led the group out of the Augusta end of the rail trail. The weather was fine - a bit breezy, but sunny and dry.

The Kennebec River Rail Trail follows along the river and the existing RR tracks from Augusta to Hallowell, where it briefly merges with street traffic through the center of Hallowell. The trail then resumes off-road for the remaining stretch to Gardiner. 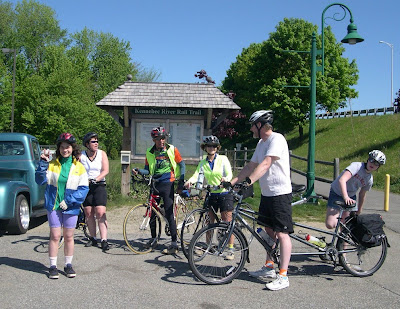 The trail is paved for most of its length - there is a short section of cinder-pack at the north end. There are narrow sections where signs direct cyclists to dismount and walk (although we didn't find that necessary with light trail traffic) and there are barriers or berms at street intersections. Two of us - Jim & I - rode tandems with our daughters, and we were able to negotiate the barriers and narrow sections without difficulty. We saw a number of young children riding solo as well, accompanied by their parents - there were two young lads who were likely not more than 4 years old. 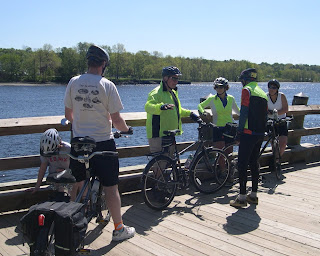 Dave took us beyond the Gardiner terminus of the trail to the riverside park just beyond, where we took in a spectacular overview of the mighty Kennebec, running clean through its banks. Dave told us that years ago, no one would want to get this close to the river, but now that it is much cleaner thanks to the efforts of many communities and agencies (and activists spurring them on) the river is now a popular spot for all sorts of recreational activity.

Including ours, and we turned back and rode the trail back to the capitol. We could see first-hand why those who live nearby the trail would find it a real attraction. 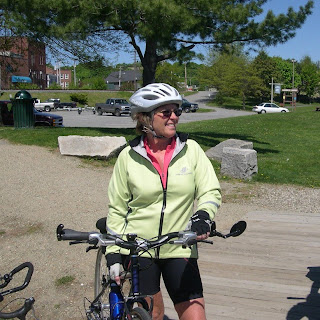 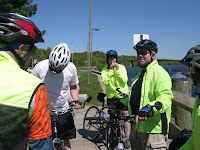