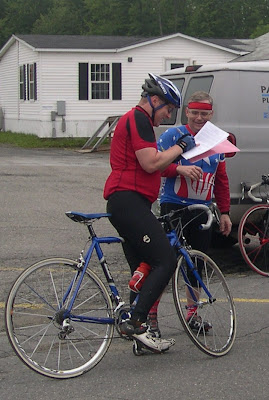 We had a splendid Fourth of July ride in Sidney. The skies were overcast, but this was offset as many showed up attired in some variation of red, white, and blue. In keeping with the patriotic spirit of the times, everyone cheerfully relinquished all of their rights by signing the release waiver. God bless the American Bar Association. 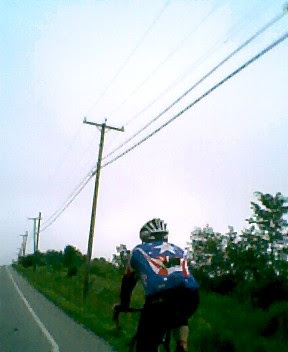 Jim took us out on a very scenic figure 8 route along the west side of the Kennebec River. There were a few inclines to climb, but also a number of fine flat stretches where we could really hammer along at a brisk pace. 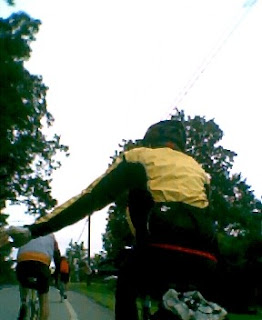 The roads, for once, were not underwater, so we could see pavement cracks, potholes, and obstacles - and even point them out to each other. The recent rains had washed out gullies along the road in some places, leaving the roads literally shoulderless. We were wary, and passed by the trouble spots without problems. The dry pavement was welcome, and made the scenery more noticeable. 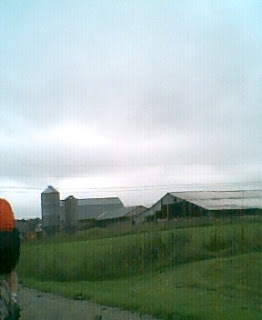 The ride passed through some prime farming area with some great pastoral views. Our intrepid cameraman, still experimenting with taking pictures on the fly with his 'glove-cam', demonstrates that he has an eye for scenic vistas, although his photo composition still needs work. 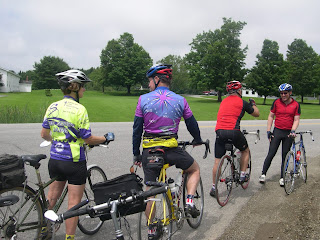 It makes things easier to document when everyone holds still - but then, that's not really documenting the ride so much as the stops. (OK, there are stops, but even if we don't always ride that fast we are usually in motion most of the time.) 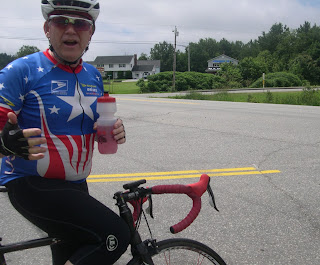 And on club rides, the ride's the thing - not the recording. We have a lot of riding still in store, so if you haven't been out on a KVBC ride yet this year, check us out!
Posted by Keeper of Ride Maps at 11:22 PM