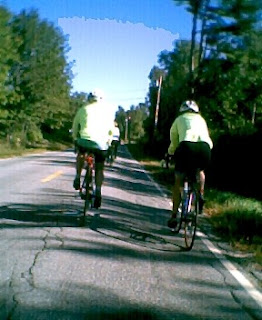 Finally some beautiful weekend weather! I hope you all were able to get out and enjoy it. Since I had to work at Colby for reunion weekend, I went out Saturday morning on an alumni ride with members of the Colby Cycling team. Not only was I the oldest one there (by far) I also had the oldest bike (by far). I dusted off my 1975 Raleigh, since I was representing the Class of '75. Both the bike and I held up OK. I brought it out again for the ride Sunday with the Central Maine Cycling Club, and again it rode really well. Would've been better if I hadn't gotten lost, but that's another story. It did get me back to the start where we had a great post-ride barbecue put together by Dave Richard and his crew, who have offered to do it again later this summer. My thanks to them all.

I hope we are in for a stretch of good weather, because Cynthia has a great ride set for this Saturday around Cobbossee Lake, followed by the Trek weekend, and Connie's breakfast ride in Augusta on June 25. Lots more to come!