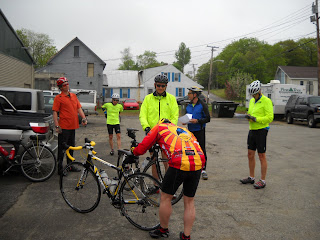 An update on a potential KVBC ride this weekend: We have no ride scheduled for Saturday, June 4, but if the planets align properly we may have something in the works for Sunday. The tentatively scheduled ride to North Haven that was on the preliminary calendar is being reworked for a later date - the logistics are a bit more challenging than one of our normal rides, but we still hope to offer an island ride later this year. Sunday is the 10th Annual Womens Ride organized by BCM in Freeport - word is that it is a lot of fun, inspiring, and worth all the effort that goes into it. For those of us who are... what's the right word? Ineligible?... anyway, for those of us who aren't attending the ride in Freeport, we might have an alternative ride closer to home on Sunday, especially if someone jumps up and offers to lead one. 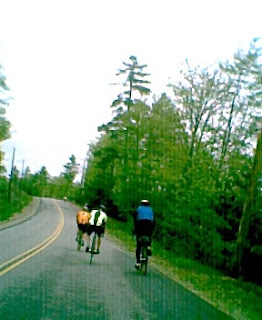 We had a fine ride last Saturday in Livermore. A bunch of us got together for breakfast before the ride at the Lunch Pad, a great little seasonal diner. Despite another dismal weather forecast, the ride came off really well. Well, at the beginning the mist was as thick as black flies (or maybe the black flies were as thick as the mist) but once we got rolling that took care of itself. There was some question as to why it was called a "single chainring tour" as there were (despite being significantly flat) a few significant hills en route. Actually it was meant to be called the "single-chainring-at-a-time tour" but I shortened it because I didn't want to be accused of being too verbose. Our thanks to Frank Rosen for another great ride. We'll see what we can drum up for this weekend. Stay tuned!
Posted by Keeper of Ride Maps at 9:47 PM