What the Doctor Ordered

With great weather and great roads ordered up by the good doctor, Jim Putnam's annual Fourth of July ride always attracts a good crowd. Traditionally on Fourth of July weekend, this year the ride was held on June 30, proceeding a mid-week 4th. 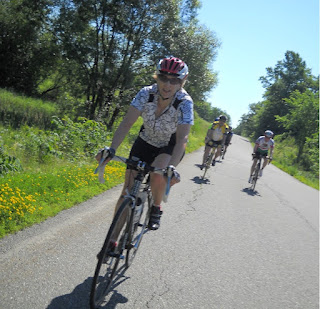 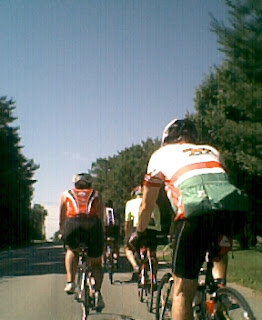 Heading out from the James H. Bean Elementary School on Middle Road on the first leg of a "figure 8" route, we climbed up and over the interstate to pick up the West River Road heading north.

Of course, when you have two flat roads that parallel, it figures that you have to do some climbing to cross over from one to the other, and getting back to Middle Road meant we had to first tackle some hill work.

The route flattened out again as we made our way back to Middle Road and the Bean School, chasing shadows a good part of the way. The second part of the ride took us past fields and bogs, down through Sidney to North Augusta, where we turned up Rt. 27 to Rt. 23, picking up the first real traffic on the ride.

We soon left the traffic behind, turning off on Quaker Road, where we encountered a hill that would make anyone quake. The climb was rewarded with a sweet downhill run, and from there it was only a series of low hills back to the start. Another great Fourth of July ride, regardless of the calendar, and just what the doctor ordered.
Posted by Keeper of Ride Maps at 9:07 PM