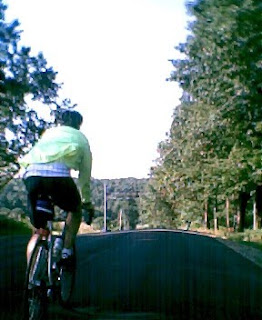 We took advantage of the great weather last Thursday to schedule a breakfast ride in Litchfield, courtesy of George Luckhurst. Due to the late notice, only two of us showed up at the start, but 'two cyclists' qualifies as an official ride in my book, so off we went. George had in mind a very pretty 18 mile loop through Litchfield and part of Gardiner. Traffic was light and the weather was perfect. We took some great back roads, passing the historic Litchfield fairgrounds among other sights. 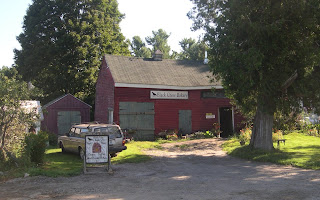 The route also took us past Litchfield's two notable bakeries. The first, the Black Crow Bakery, is a very enticing establishment. Attached to a historic site with its own roadside historic marker, the Purington-Shorey Homestead, the Black Crow looks like a country bakery. Despite the sign advertising "Fresh Bread - Cookies - Pasteries" we showed great restraint by continuing past without stopping. 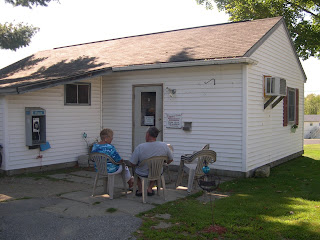 Instead, our destination was Litchfield's other bakery, the Litchfield Country Cafe, near the junction of Rt.126 and Hallowell Road. The Country Cafe is a small, cozy restaurant-bakery with perhaps a half-dozen tables inside and an active waiting area outside. We were fortunate to get a table without waiting, although the waitress, who knew George, suggested otherwise. All of the store's baked goods are prepared in house, ensuring both quality control and a steady stream of customers to the front door. Indeed, the raisin toast that came with my breakfast of eggs, corned beef hash, and homefries could well have made a meal in itself. Just as well that it didn't, as the hash was the best I've had on any ride I can recall. The meal was so substantial the waitress actually talked me down into ordering a half-side of homefries. Since it was her recommendation, I could leave with my reputation intact and still ride afterwards. 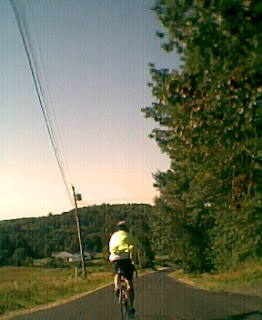 As it was, we only had a couple of miles to go back to the start. A very nice Two Wheels Over Easy ride. Now, we just have to go back and try out that other bakery...
Posted by Keeper of Ride Maps at 8:38 AM