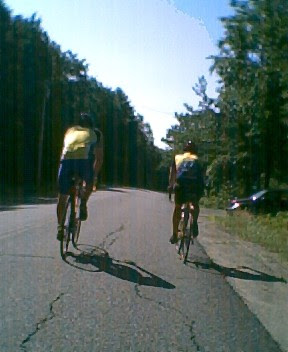 It was a beautiful Saturday morning in Smithfield for the double figure 8 loop starting at the Smithfield Fire Station on Rt. 8. Or at least the sign on the building said "Smithfield Volunteer Fire Department" but as I pulled into the parking lot, out the rear door of the station came sputtering a 1917 Model T Ford. Surely the Smithfield Fire Department is a bit more up-to-date than that. In fact the fire station had moved to its new digs in the former elementary school about a half-mile further up Rt. 8, where one rider correctly followed my incorrect instructions to the start. The old station had been bought by an antique car enthusiast to store part of his impressive collection. We passed him driving his Ford around town later, sputtering from one yard sale to another. 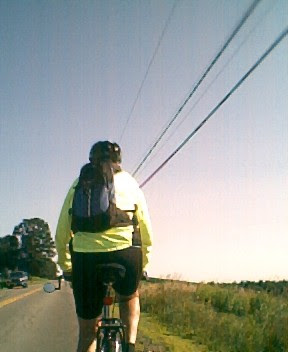 Four of us set out on Rt. 8 for the first loop around East Pond. This 14 and a half mile loop is remarkably flat, alternating between open farmland and quiet wooded roads. There is one fairly long climb up to join Rt. 137, followed by a nice downhill back to Rt. 8. Rolling back into Smithfield we caught a great view of North Pond from the ridge, as there was hardly a cloud in the sky. 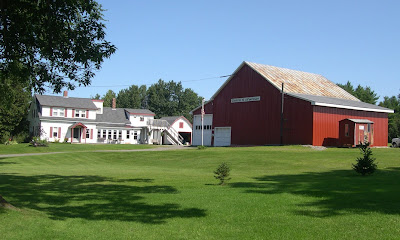 Coming back into Smithfield we passed several handsome farms. One boasted a huge red barn with a large hand-lettered sign proclaiming in Latin: Illegitimis nil carborundum. I did not have my 12-year-old homeschooler, the Latin whiz, along with me so I was left to my own rusty Latin to decypher this phrase as I rode along. "Nothing is legitimate without work?" Nah, that wasn't it. Turns out the phrase doesn't make sense because it's fake Latin, meant to say something like "Don't let the bastards wear you down." I guess my old high school Latin teacher was right - you can have too little classical education. 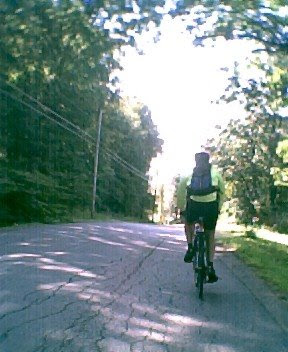 The second loop featured a splendid run along the shore of North Pond. We followed Rt. 137 past more large farms (sans Latin this time), traversed a short stretch on Rt. 2, and climbed up Beech Hill Road. This was followed with a great downhill back to Smithfield and another fine run skirting along the shore of North Pond. At the ride's end we stopped for ice cream at the local creamery in town, which has a great outdoor seating area out back, and even a dock for canoes and kayaks coming in off the ponds. All in all, a great ride, sine dubio.
Posted by Keeper of Ride Maps at 8:48 AM